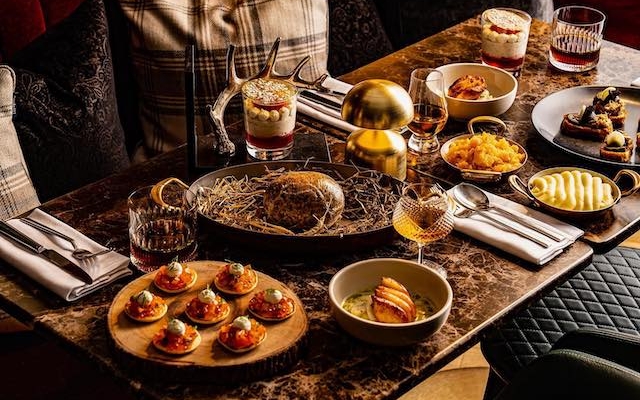 Where to Celebrate Burns Night in London 2023

The recently opened, art-filled restaurant serving a Burns Night special for one night only. On Wednesday January 25, alongside the regular a la carte menu diners will have the choice of a three-course special menu to mark the occasion. Dishes include: smoked haddock & potato soup, topped with a poached egg, venison & haggis wellington with crushed neeps, mashed potato, whisky sauce and McCallan whisky cheesecake with raspberry sorbet. The menu is priced at £80 per person and based on a minimum of two people sharing.

The Bishop at The Berkeley

The Berkeley hotel’s pop-up pub marks Burns Night with a one-off supper club on 25 January. Prop up the bar, and be greeted with whisky cocktails and pub snacks before being invited into the dining room for a four-course menu of Scottish delicacies, all paired with the finest drams from Aberfeldy. The four-course menu includes dishes such as a traditional Cullen skink and haggis - served with barrel-aged whiskey sauce and the classic ‘neeps and tatties’ - and will be piped into the dining room by a traditional Scottish bagpiper. This event is priced at £75 per person.

On Tuesday 25th of January Park Row, the UK's first DC-inspired restaurant, is hosting its first ever Burns Night. Drawing on Bruce Wayne's Scottish heritage, the evening takes the form of a night at the Wayne's ancestral highland home. The feast (priced at £65 per person) begins with a selection of canapés before three courses of Gaelic-rooted gastronomy with dishes such as Orkney scallop with Cullen skink cream & leeks and Haggis with neeps & tatties, glass of buckshot. Each course comes with the option of whisky pairings priced at an additional £60 per person). Pictured.

For homesick Scots and curious Sassenachs who can’t get north of the border for Burns Night, there’s only one place to address the haggis and that’s at Boisdale, Scotland’s unofficial embassy in London. Traditional Burns Night Dinner will be served at both Boisdale sites: Belgravia and Canary Wharf venues from January 24th onwards. Be transported deep into the Scottish Highlands with a resplendent feast, including Orkney salmon, Scot­tish pheas­ant and Aberdeen­shire dry-aged beef fil­let, and of course the star attrac­tion, Dum­friesshire Black­face haggis with bashed neeps & tatties and served with a noggin of whisky. Whiskey will flow, and there will be a piper and an address to the haggis as well. Each night will feature live music and entertainment. Tickets from £79.

Quo Vadis has announced the Quo Vadis & Friends 2023 part one line up. The series sees chef patron, Jeremy Lee, invite his friends from some of the most exciting kitchens in London and further afield, to come and cook on the second floor of the Quo Vadis club. For the first event of the 2023 series, London’s favourite flatbread fiddlers, Black Axe Mangal return to the stoves at Quo Vadis for an alternative Burns Night feast (on January 25) with Quo Vadis’ very own Scottish bard, Jeremy. We can confirm that there will be haggis, neeps, tatties and bagpiping involved. Priced at £60.

The Michelin-starred restaurant is collaborating with The Dalmore with an exclusive dinner to celebrate the unveiling of the 2022 collection of Vintages, The Dalmore 2003 and The Dalmore 2007. The dinner takes place, appropriately, on Burns Night, in the elegant setting of the Hide & Seek Room. The evening begins with a welcome Dalmore cocktail, followed by a taste of the Highlands with a five-course menu (dishes include roast Orkney scallops with swede & black truffle and slow cooked lamb broth with barley haggis & dumplings) created by Ollie Dabbous especially for the occasion, showcasing the best in Scottish produce. A premium wine & whisky pairing will be served alongside the menu, including, of course, a toast to Scotland’s greatest poet on his birthday. The ticket price (£450 per person) also includes a bottle of The Dalmore 2007 to take home.

"But we hae meat and we can eat, And sae the Lord be thankit." For homesick Scots and curious Sassenachs...

The Feast of Beekeepers at Bocca di Lupo 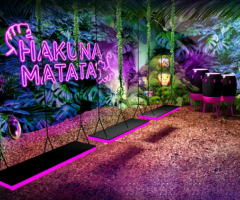 Wonder of Friendship: The Experience 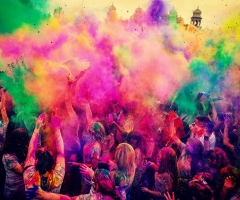 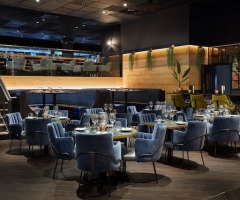