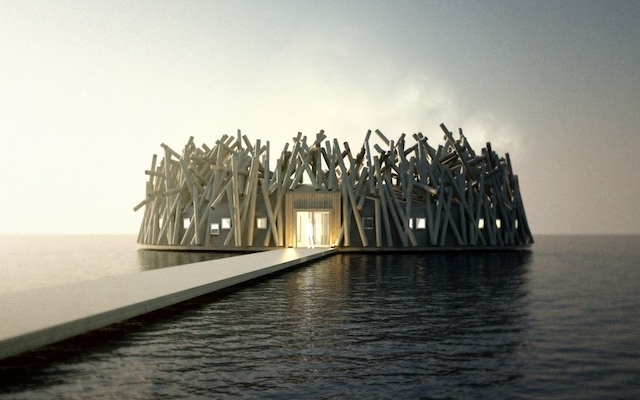 Our guide to some of the most anticipated hotel openings in 2020, from Sweden to California.

The back-to-nature Arctic Bath features six cozy cabins and a full-service spa with hot and cold plunge pools. The team behind Sweden’s world-famous Treehotel is back with this new hotel and spa that floats along the Lule River in summer and freezes into the ice during winter - all in a prime spot to experience the Northern Lights. A stay at the six-room, nest-like Arctic Bath Hotel and Spa in Harads, Swedish Lapland, includes a luxurious experience in a design-forward spa inspired by floating timber. The sleek Arctic Bath houses one spa treatment room, four saunas, a hot bath, an outdoor cold bath, plus outside and inside showers. The circular shape creates a haven to relax and soak up the local Arctic environment. Experience the spa bath and stay overnight in a room that will float or be frozen into the ice, depending on the season.

The Cheval Blanc brand was created in 2006 and has high-end properties in Courchevel, the Maldives, Saint-Barthelemy and Saint Tropez. Another is due to open towards the end of the year in former art-deco department store La Samaritaine in Paris - a few steps away from the Louvre and the Marais, in front of the Left Bank. The 72-room and suites -  designed by Peter Marino is due to open in the spring. It will have a seventh-floor seasonal Mediterranean gourmet restaurant by the acclaimed three-Michelin starred chef Arnaud Donckele - who is also the chef at the Vague d’Or in Cheval Blanc St-Tropez. There's also a Dior Spa.

A Bvlgari Hotel is scheduled to open in Paris, in 2020, following new openings in Beijing, Dubai and Shanghai. The hotel is located at 30 Avenue George V and comprises of 76 rooms, most of them suites, and a full range of luxury facilities including a spa with a 25-metre pool and a Bvlgari restaurant and bar opening to a charming al fresco courtyard garden. Set on an exquisite corner of the Triangle d’Or, the hotel has been designed by the renowned Parisian architects Valode & Pistre. The restyling of the building combines a classic Parisian Haussmann-style with contemporary architectural design.

Airelles Château de Versailles, Le Grand Contrôle, Paris
Visitors to the magnificent Château de Versailles won't have far to go to spend the night in regal style. The first hotel on palace grounds, is Le Grand Contrôle, transforming historic buildings not far from the iconic Hall of Mirrors into luxury accommodation - elegantly designed in the classic, 18th century style by architect and interior designer Christophe Tollemer. Le Grand Contrôle hotel houses just 14 rooms and apartments, an Alain Ducasse restaurant with terrace for dining al fresco, a wellness center and an indoor swimming pool - in addition to being located in one of the most opulent places on earth.

Hôtel Costes, one of the hippest and super-chic hotels in Paris is coming to London. The elegant (and infamous) hotel in Paris' 1st arrondissement, by visionary designer Jacques Garciais and owner Jean-Louis Costes; is set to open a new outpost in Chelsea; taking over (and revamping) a Victorian apartment building (at One Sloane Gardens) on the corner of Sloane Square. The (sure to be decidedly opulent) 40-room boutique hotel is in conjunction with Cadogan Estates and is slated to house a roof top bar and restaurant. The property (Jean-Louis Costes first project outside Paris) is to reflect “the enduring principles of elegance and individual spirit — capturing the best of the cultural and social milieu of the property’s location and moment in time”.

Quintessential New York urban boutique hotel has its sights set on London. The boutique bolthole group debuted in New York City’s Nomad (meaning north of Madison Square Park) neighbourhood in 2012 and spawned a second outlet in Los Angeles, with a third in Las Vegas. Housed in a 19th century, Grade II-listed building in Covent Garden, which is being transformed into a 91-bedroom hotel with much of the original architectural features preserved and woven into the design. Due to open in 2020, it will feature the first ‘NoMad lounge’ and, as with other NoMad hotels, will include a restaurant - serving European-American cuisine - under the direction of Eleven Madison Park's Daniel Humm - who's also behind a restaurant in Mayfair's Claridges hotel - Davies & Brooks.

Zurich is the fourth hotel within the iconic La Réserve collection, which currently has outposts in Paris, St. Tropez and Geneva. Right on the shores of Lake Zurich, this 40-bedroom hotel is currently being transformed by architect and designer Philippe Starck who has described the hotel as ‘like dancing rock and roll with the Queen of England. Everything is traditional, yet resolutely unconventional. It’s a timeless cocktail composed of classicism, modernity, intelligence and creativity’. The hotel is on the shores of Lake Zurich, a short walk from the city centre and also offers a rooftop bar and restaurant ‘La Muña’, a smoking lounge and indoor restaurant and bar with a knock-out wine cellar - home to a bottle or two of Cos D’Estournel wine and Michel Reybier Champagne.

The Hoxton, Rome is slated to open its doors in autumn 2020. Marking the brand’s 6th property in Europe, the 192-key project features a large coffee bar, light-filled restaurant and outdoor terrace in the Salario neighbourhood – an area north of the city centre. Designed by Ennismore Design Studio in collaboration with Fettle Design, the aesthetic takes cues from the building’s 1970s detailing, the striking entranceway of the structures surrounding it, and the area’s marble-clad walls and terrazzo floors. The announcement rounds out a busy year for the group, having opened The Hoxton, Chicago in April, The Hoxton, Southwark in September and The Hoxton Downtown LA in October.

Due to open in spring 2020, the stunning new One&Only Portonovi is the brand’s first resort in Europe. This wonderfully secluded property nestles beside the entrance to beautiful Boka Bay, surrounded by striking mountains and the Adriatic Sea and opposite the UNESCO World Heritage site of the Bay of Kotor. Set to become Montenegro’s most coveted address, the Venetian-inspired resort offers enriching experiences for all ages – whether you head out to explore some of Europe’s most picturesque towns, discover captivating caves by boat, or simply unwind on the private sandy beach. In partnership with world-famous Espace Chenot, the spa offers a revolutionary blend of Chinese medicine and western technology, while there are no less than six resort pools to choose from - including the vibrant Tapasake pool club. Expect a tranquil hideaway where the mountains meet the riviera.

One&Only are also opening One&Only Mandarina, close to Punta Mita. This new resort - with 104 wood-filled treehouses and clifftop villas - nestles within the Mexican jungle upon a rare undeveloped coastline along the Riviera Nayarit. Additionally, the group is opening its first resort in Asia - One&Only Desaru Coast Set in south-eastern Malaysia this beachfront escape has a lush tropical backdrop and private stretches of white powder sands between lush jungle flora and South China Sea.

The luxury hotel group - with its commitment to wellness and sustainable practices - is set to open its first North American property - a key element of The XI - two unique, twisting towers designed by world-renowned architect Bjarke Ingels, in an unparalleled location in between Manhattan’s Hudson River and The High Line. Its 137 rooms, spread across 10 storeys, sit in the East Tower offering up views over the High Line, the river, and Downtown and Midtown’s skyscrapers. Two restaurants showcase the brand’s popular culinary approach to wellness, and the Six Senses Spa will introduce a new direction of wellness treatments. The hotel aims to become LEED-certified.

Six Senses is also set to open in Rajasthan, India next year inside a converted 14th century fortress and found 110km southeast of Jaipur as well as taking up residence in the Israeli Negev Desert - perched on a dramatic cliff with panoramic views of the desert.

Aman hotels and resorts are usually situated in exotic landscapes such as Cambodia or a private island in Montenegro. The new Aman New York transplants the signature serene experience to one of the world's busiest cities. The development occupies the Crown Building situated in the heart of Manhattan on the corner of 5th Avenue and 57th Street. Aman New York, comprises a luxury hotel with 83 rooms and suites and 22 Aman-branded private residences and a 25,000-square-foot spa that spans three stories and features a 65-foot indoor swimming pool, sauna and steam rooms, hot and cold plunge pools, and an outdoor terrace with cabana, daybed, and fireplace. Elsewhere in the building you’ll find a subterranean jazz bar, wraparound garden terrace overlooking Central Park, and dining spots including the Italian restaurant Arva and Japanese dining concept Nama. A gilded retreat in the heart of Manhattan.

Adding even more appeal to California’s Wine Country, Four Seasons are to open a lavish new five-star resort in Napa Valley. The new Four Seasons is located at 400 Silverado Trail in the charming community of Calistoga, just 90 minutes and yet a world away from San Francisco, the Bay Area and Sacramento. Designed by Napa's own Erin Martin and with just 85 accommodations, it promises to be an intimate retreat that invites guests to explore the natural beauty that surrounds it. With its on-site vineyard, vine-to-table restaurant, wellness spa and farmhouse-style accommodations, it promises to be the perfect base for a wine country getaway.

Rosewood São Paulo is located in an historic 1904 building that was formerly a maternity hospital in the center of Cidade Matarazzo, a complex of elegant, preserved buildings that were built in the early 20th century. The hotel features 151 guestrooms and 122 owners' suites, which will be situated within a vertical park created by Nouvel with interiors by renowned designer Philippe Starck. Two restaurants, including one located on a veranda overlooking the lush hotel gardens, will be complemented by a bar and a caviar lounge. Two swimming pools (one rooftop pool), and a large spa with six treatment rooms and fitness area. Hotel guests will also be able to access an adjoining music studio, a screening room and high-end retail stores within the development.

Renowned actor and keen environmental activist Leonardo DiCaprio plans to "create an eco-conscious resort" on Blackadore Caye, his private island in Belize. The environmentally-conscious actor is partnering with NYC developer Delos on the resort and fetaures 68 ‘sprawling’ villas, infinity pools and amenities like special lighting that encourages sleep. The New York Times also reports that Deepak Chopra will "spearhead a program focused on health and anti-aging" at the resort. The “restorative” aspect doesn’t only refer to its healing effect on visitors, but also on the island itself – as the development includes restoring the island’s natural environment and a research station focussed on climate change.

The Royal Atlantis Resort & Residences on The Palm in Dubai is destined to become an iconic, world-renowned address boasting a 800-room hotel and 250 luxury residences with retail and restaurant offerings. Building on the success of Atlantis The Palm there are 65 outdoor pools, 1.7 km of private beach, and an 85-m-high sky garden with an infinity pool overlooking the Gulf and Dubai. Opening in the new hotel is Jaleo from chef José Andrés, and it will also be home to Dinner from Heston Blumenthal, the British chef behind The Fat Duck and a rooftop outpost of Hakkasan.

Located in Bali's lush Ubud region. With a laid back vibe, this hotel offers everything from mountaintop sunrise yoga to late night dancing under the jungle stars. With 100 guest rooms and 10 villas with private pools, the hotel weaves traditional Balinese culture and aesthetic into the design while keeping to its signature eclectic vibe. The brand's 'work hard, play hard' philosophy is also in place here, with fitness and wellness programmes, poolside DJ performances and an abundance of healthy cuisine. When you want to relax, laze by the two pools or escape to the Away Spa to experience a number of locally-inspired treatments. 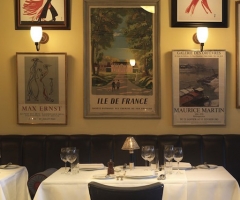 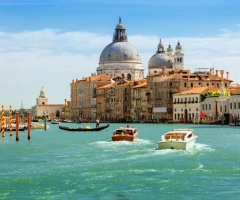 Where to Dine Out in Venice 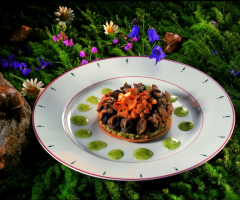 Where To Find The World's Most Beautiful Dishes 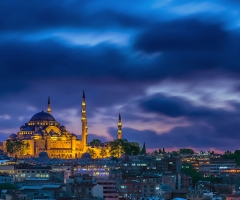