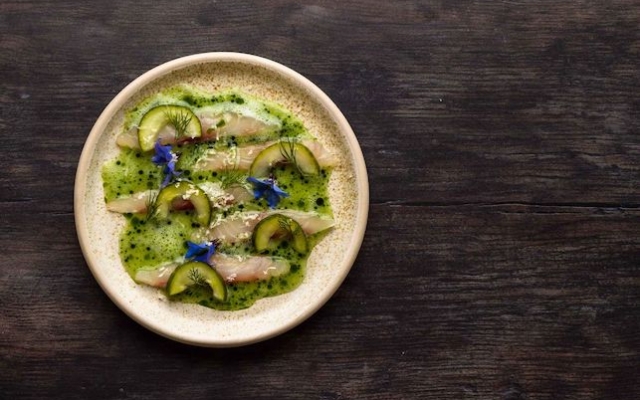 We delve into discovering London's most sustainable, ethical and conscientious establishments and where to dine with a guilt-free conscious.

A ‘wild food' concept with a focus on sustainability and seasonality whilst dishing up casual sharing plates, natural wines and cocktails with foraged ingredients. Having escaped Borough for Osea Island last year, Imogen Davis and Ivan Tisdall-Downes have return to London to set up a Native restaurant in the Browns flagship store in Mayfair. This city outpost continues to uphold the zero-waste, ethical, sustainable and seasonal cuisine of the original. The restaurant continues to champion seasonal produce and ethical dining through a selection of innovative yet casual sharing plates overseen by Head Chef Joe Knowlden, who most recently worked in the kitchen at Hide in Mayfair - alongside natural wines and foraged cocktails. Native has worked closely with Browns and respected architects Red Deer on the interiors which are filled with pieces from artisans of sustainable pieces from across the UK.

London’s favourite chophouse with restaurants in Soho, The City, Shoreditch and soon Covent Garden - have kept their absolute commitment to sustainability true to the bone as well as being renowned for the highest-quality, sustainably-reared meat. With sustainable wine on tap served by the litre and a pip-to-peel ethos behind their bars, the menu is full-circle and keeps waste at an all time low. Furthering the brand’s sustainability ethos, Blacklock has begun the journey towards B Corp status, a certification that proves a company's commitment to purpose over profit. In line with this, Blacklock’s ‘Planet Promise’ sees a tree planted for every customer that dines with them - an initiative launched during lockdown which has so far seen over 125,000 trees planted.

Warehouse at The Conduit

A sustainably-committed restaurant from the former Head Chef of Silo - the ground breaking zero-waste restaurant. Based on the ground floor of the Grade II-listed site and members' club - the artisanal and minimalist restaurant has an earthy feel, with hand-painted tiles, hand-woven curtains and reclaimed furniture dotted across the 80-cover space. The kitchen is headed up by Brendan Eades, formerly head chef of Hackney Wick’s zero-waste restaurant Silo. In keeping with the club’s ethos, Eades is serving up a boldly flavoured, seasonal menu, the ingredients of which have been sourced from carefully selected suppliers with a deep commitment to sustainability. In charge of the cocktails is mixologist Walter Pintus (The Ritz London), whose ‘hyper-seasonal’ drinks menu features cocktails infused with home-made cordials, vinegars and pickles.

Following on from their recent residency success, dine on sustainable root-to-tip dishes at their next (and permanent) incarnation. Chefs Jack Croft and Will Murray - met whilst working at two-Michelin starred restaurant Dinner by Heston Blumenthal - embark on a new and more permanent venture - having hosted a longterm residency at 10 Heddon Street - for their sustainability-focused restaurant concept serving up their ‘nose to tail’ and ‘root to stem’ cuisine. Expect creative, pared-down dishes championing seasonality, the offering is satisfying and sustainable, with dishes such as bone marrow & parsley, corn ribs, and dairy cow with smoked beetroot. To wash it all down, there’s a list of biodynamic wines and creative cocktails. The team have reused and repurposed many existing fixtures, giving them a fresh new look. Walls are clad using a terrazzo-style bespoke shellfish panel, using leftover oyster and mussel shells accrued from their Heddon Street residency, as well as a rotating mushroom wall.

Food writer and cook Ravinder Bhogal's debut restaurant in Marylebone. Jikoni, meaning ‘kitchen’ in Swahili, features a menu focusing on cuisines from Britain, East Africa, the Middle East, and Asia. the restaurant draws on award winning food writer and cook Ravinder’s mixed heritage and travels, with flavours and culinary traditions - and the restaurant is dedicated to ‘the maternal figures who made my world safe with their food’ with a menu of "simply the kind of food I love to cook and eat with friends and family at home". The space has been designed in a collaboration lead by London studio, Creative Family, and takes inspiration from the maternal kitchens of Ravinder’s childhood. Jikoni became the first carbon neutral independent restaurant in the UK - the restaurant has been powered by solar power, wind power and carbon neutral ‘green gases’ and they've also partnered with non-profit organisation Climate Neutral.

Brighton's pioneering zero waste Silo brings chef Douglas McMaster’s vision for eco-friendly eating to London. Silo is the multi-award winning restaurant, bakery, coffee house and brewery that prides itself on a zero-waste philosophy. The UK's first zero-waste restaurant originally opened in 2014 (in Brighton) by former BBC Young Chef of the Year, Douglas McMaster who has worked in some of the world’s finest restaurants including Noma, St. John and The Fat Duck. Expect a menu of 'edgy eco-food' - small plates and tasting menus, with dishes such as mackerel tartare with purple daikon and miso and pollock with negi onion and crab emulsion. The wine list celebrates natural wines offered alongside fermented drinks using foraged and intercepted plants and herbs. The room itself has a no-waste ethos, with an open kitchen featuring a wood-burning stove at the centre and post-industrial materials used for the furniture, not to mention a countertop made from recycled glass bottles with furniture and fittings either upcycled or recycled.

A restaurant by one of Britain's most respected and acclaimed chefs, Skye Gyngell, who launched a sustainable ‘Scratch Menu’ back in 2016 - using 'waste' produce and ingredients that are often overlooked. Then, in 2019, Spring became the first single-use plastic-free restaurant in London. Set in the beautiful location in Somerset House - with its pastel hues, 19th-century pillars and leafy atrium, Spring at Somerset House is one of the prettiest restaurants in town – yet it’s certainly not style over substance. Naturally, the daily-changing menu is produce-led and seasonal - and the main draw.

Established by Gael and Francesco Boglione, Petersham Nurseries is a family business that operates in sync with nature - a world-famous destination, known as much for its stunning setting and rustically elegant decor as its phenomenal food. From its serene wooden teahouse, antique-filled plant nursery, the family-run brand promotes a positive living attitude without deviating from nature and the earth, while upholding sustainable values around the slow food philosophy of ‘Good, Clean and Fair'. The eatery was something of a pioneer in sustainable dining. Nearly all waste from the restaurant is recycled, while an aerobic food digester turns food waste into water. Much of the produce for the restaurant comes from the family farm in Devon, where organic farming is practiced. All this has led to the restaurant being awarded with a Michelin Green Star, a new award introduced to celebrate the food spots leading the way in eco-friendly dining.

Tucked away in the heart of Clerkenwell, The Clerkenwell Kitchen tries to be as ethically sound as possible, sourcing ingredients locally, cooking seasonal dishes and using organic and free-range produce. Every weekday they prepare six lunch dishes and a selection of sandwiches freshly made to order. Before opening The Clerkenwell Kitchen, one of the passionate founders had previously worked for Hugh Fearnley-Whittingstall at River Cottage in Dorset and the other was the head chef at La Fromagerie in Marylebone. The foodie principles and ethos of good home cooking are clearly reflected at The Clerkenwell Kitchen, which focuses on simple and well-prepared food, with jams, chutneys, pastries and breads and fresh lemonade all made on the premises. Dishes such as watercress soup; char-grilled squid with roast potatoes, green beans and marjoram and poached pears and pannacotta have recently featured on the menu. They also use only biodegradable packaging and recycle most of their own waste.

Argentine steak restaurant group Gaucho re-opened its Charlotte Street outpost in London - unveiling a completely revamped menu, a more contemporary approach to interior design - but also a more robust approach to sustainability, which is gradually being rolled out across all their restaurants. The carbon emissions in Gaucho’s beef offering have been reduced at source, then calculated from field to fork at source before being offset through a reforestation programme in the Amazon with charity partner ‘Not For Sale’ who rescue victims from the threat of ‘modern-day slavery’ to plant trees for Gaucho. In turn producing a "carbon neutral steaks"’, a truly guilt free steak offering - part of the 'Sustainable Steak Movement'. As of January 2022, all Gaucho restaurants will boast a carbon neutral steak and wine offering alongside a zero food waste and green energy policies.

Former chef-patron of Tredwells' restaurant is behind this new plant-centric, sustainability-minded Mayfair restaurant - opening March 2022. Apricity sees the New Zealand-born chef’s continued commitment to sustainability and social responsibility - serving up a plant-centric menu of hyper-seasonal, sustainable plates that celebrate the very best of British produce and zero-waste cooking. Besides an à la carte offering, the restaurant will offer two tasting menus; one being vegetarian. The British-centric and socially conscious focus runs onto the drinks list as well, with a number of English wines on the low-intervention list, as well as a number of zero-waste cocktails.

The restaurant has been designed by Object Space Place, using a restorative design framework, in keeping with the concept of a circular economy, with sustainable design and operating principles being followed. 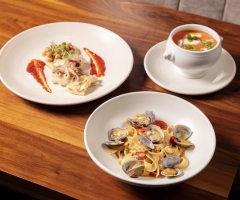 An Italian Summer Holiday Series at Sette by Scarpetta 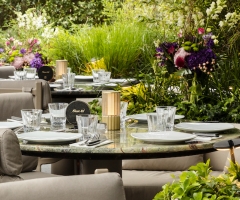 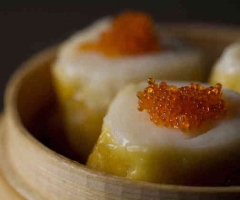 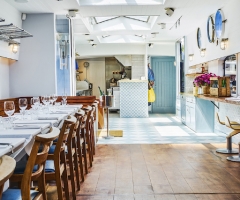